You are here: Home / Fitness / Why is the Ancient Practice of Yoga More Popular than Ever? 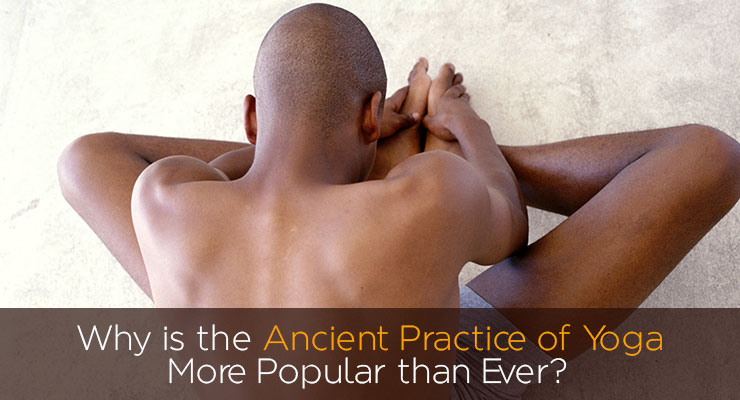 While the origins of yoga date back to thousands of years ago, today the ancient practice is more popular than ever. Yoga originated in ancient India and first caught on in the United States in the 1960s. However, until recently, the activity fell short of gaining widespread popularity.

In recent years, the ancient art of yoga has skyrocketed in popularity and is more widely available. According to a National Health Interview Survey (NHIS), the number of adults who performed yoga practically doubled between 2002 and 2012. In 2013, over 24 million American adults used yoga, which makes yoga as popular as golf. This is a substantial increase from 2008 when 17 million people did yoga, a Sports & Fitness Industry Association survey reported. Yoga is also becoming more popular among children. Approximately 429,000 more American children did yoga in 2012 than in 2007.

If yoga has been around for hundreds of years, why is it just recently gaining widespread popularity in the U.S.?

One reason is yoga is more widely available and accessible than it has been in the past. While yoga used to be primarily restricted to yoga studios, now it’s offered at most gyms and fitness centers, as well as featured on all sorts of fitness videos. People can practice yoga in the comfort of their own home or attend yoga classes at their gym.

In addition to its widespread availability, yoga has gained popularity because of its versatility. Unlike with many other fitness activities, such as basketball, gymnastics or football, you don’t need to have a certain physical stamina or be a particular size to enjoy the exercise. While yoga involves flexibility and strength, participants don’t have to be extremely flexible or strong to partake in the activity. The activity is suited for people of all ages and skill sets. However, as with any physical activity, the more you practice, the better you become.

While these reasons have attributed to yoga’s rise in popularity, the most prominent reason for its growth is its health benefits. Due to modern innovations in science and technology, we know much more about the health benefits of yoga. Today, we know yoga strengthens one’s core and muscles, increases flexibility, and reduces anxiety and stress, among many other physical, spiritual and mental health benefits.

Here are some of the major health benefits of yoga:

With these health benefits and yoga’s widespread availability, the exercise will only continue to grow from here.

Hugh Sinclair is the Vice President of Logistics at Shopping Blitz, an online marketplace and store in Union, NJ that provides over 350 of the world's best brands of clothes, shoes, accessories, and lifestyle products.