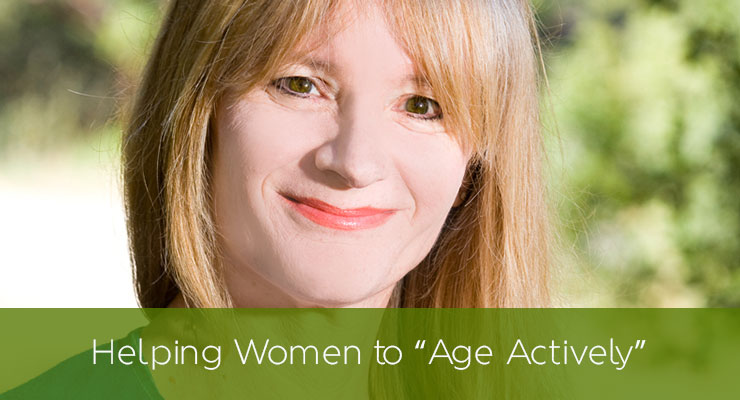 Santa Barbara-based Alexandra Williams, along with her twin sister, Kymberly Williams-Evans, has an infectious energy that has been a feature of their active lives almost from the day they were born.  Raised by a mother who taught modern dance, they spent many childhood years acting and dancing in musical theatre. In their teens they took up soccer, and in 1982 Kymberly went to Germany to teach English and dance, only to discover a studio that taught a new type of movement called aerobics. Alexandra promptly joined her in the still-divided city.  “Aerobics was all high impact and leg warmers,” she says.  “We did a weekly exercise show on the military channel there, plus taught at the first Berlin aerobics studio.”Alexandra wanted to study Russian language and literature, so she moved back to the States and started teaching exercise classes locally in order to support herself. “Little did I know I’d still be teaching and traveling the world with fitness thirty years later,” she says.  “I teach in the Exercise Studies department at UC Santa Barbara. Besides that, I work on our blog FunAndFit.org, which is geared toward boomer women who want to age actively, I write for print magazines, I co-host a radio show, and I mentor new instructors. I also compel my boys to walk the dogs with me.”A frequently-asked question put to Alexandra and her sister is where to start if someone wants to lose weight. Her answer begins with a question, “What’s the least you can do?” She says that it sounds counter-intuitive, but “usually people make a grand, general plan, say, I want to lose 50 pounds, yet have no idea what the small steps are to get to the end goal.”  Her advice is to make a list of the ten steps needed to get from 1 (where you are now) to 10 (50 pounds lost). “The steps must be measurable, specific and realistic.” They have written blog postings to flesh this out in more detail.  When asked for tips for someone who doesn’t have access to a gym, she rubs her hands together.  “But of course,” she says.  “If you can get outside, walk around the block. Having said that, I live on a mountain, so a walk around the ‘block’ would take a few days! You can do lots of movement in your house – pushups against the kitchen counter, sit-to-stand squats while watching television or sitting down to dinner. You start to sit, then stand back up, then sit. Do this every time you go to sit down and you’ll have added a lot of squats to your day.”  She adds that rudimentary weights can be made out of five pound bags of rice for bicep curls, or to perform ab crunches. Even a can of tuna can be enlisted (see video).When asked for the best exercise for those with over 20 pounds of fat to lose, Alexandra’s answer is simple. “The one you’ll do.” Sometimes people want to know the quickest, or most effective when they say “best,” but the truth is “an exercise is only effective if you do it. So choose one you’ll enjoy, or at least do. Having said that, if someone is trying to lose 20 pounds in a hurry, they are best off with High Intensity Interval Training. But if the extra 20 pounds is hard on the joints, this type of training is contraindicated.”Alexandra is often asked who her fitness mentors are and why, and her answer is consistent. “My mom was a modern dance teacher with five young kids, yet she found a way to teach dance and include us. So she instilled a love of movement in me. Then my twin sister Kymberly and I went from playing college soccer to teaching aerobics back when it was new. My sis was the one who convinced me to move to Berlin and start teaching over thirty years ago, so that worked out rather well.”  There are some industry professionals that she really likes because they offer “fun, safe and effective workouts,” but they did not mentor her.A lot of people start exercising regularly, but still struggle to lose some extra pounds. In Alexandra’s experience, the key factors that prevent people from losing weight despite regular exercise are that they probably have not changed their eating or sleep habits. “If you exercise intensely for an hour and manage to burn 600 KCals, then drink a frou-frou coffee drink, you just drank back those 600 KCals in three minutes, which is very disheartening. On the bright side, people who start including strength training as part of their routine may gain weight as they build muscle, yet will find their clothes loose-fitting.”  She advises people to dump the scale “unless using it to do overhead presses!”Hormone imbalances may hinder people’s weight loss efforts, particularly during menopause, and tests can be preformed to diagnose the imbalances. Alexandra recommends her colleague Tamara Grand, a personal trainer and fitness author who has a whole series on this.  Any training regimen that can be offered to a client who says they strictly wants to lose weight depends on the client’s history, schedule, motivation, “and how many delicious snacks she brings me!”  In general, Alexandra recommends starting with:

She says that these may seem “boring, yet are extremely effective.“When asked about how much weights versus cardio women in their forties should do, Alexandra laughs.  “They are friends,” she says, “so there is no ‘versus.’ They need to work together. A woman in her forties needs to do both. How much, how often, how long, and what type depend on the woman, but a good place to start is 50/50. If she is a new exerciser, then three days a week, 60-90 minutes at a time is a good place to start. And ladies, go big. You are not doing bodybuilding (unless you really are), so you aren’t going for one rep maximum. You are going for health, energy and looks, right? So work up to at least 8-10 pound barbells in each hand if you are using free weights.”When one is trying to lose weight or get in shape, goals are all important, so what should they set out to accomplish, and what would be a healthy time frame to to accomplish the goal of losing 20 pounds?“Follow the ten-step outline I mention above,” she says. “If you don’t write down specific steps, you have no idea how to get to your end goal. And it’s best to lose 1.5 – 2 pounds per week. If you diet and lose lots of weight quickly, that’s exactly how fast you’ll gain it back. How long did it take to put on those 20 pounds? Yeah, frustrating. But healthy and realistic. And remember, the goal is to lose weight and keep it off, not lose it repeatedly.”Good advice.

Eamonn Gormley is a Silicon Valley-based freelance writer and marketing consultant, and contributing editor of Forásach.com, a news and analysis website. He is also the author of Waiting to Launch - The Untapped Global Potential of Gaelic Games. He enjoys road biking, Salsa dancing and Zouk dancing.