You are here: Home / Archives for Dr. Fred Pescatore

Fred Pescatore, MD, is a traditionally trained physician practicing nutritional medicine in Manhattan. He is the author of Logical Health Alternatives, a monthly print newsletter, as well as six books, including the New York Times best-seller, The Hamptons Diet and the number 1 best-selling children's health book, Feed Your Kids Well. To learn more about Dr. Pescatore, visit www.drpescatore.com. 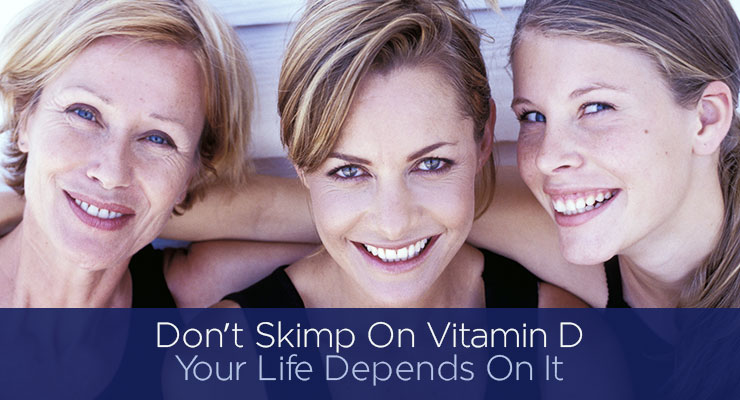 There’s a good reason I talk about vitamin D so often. It’s because new research emerges every day showing this critical compound can save your life—if you’re getting enough of it.

In fact, there were a slew of studies published in the first few months of 2014 alone. So I’d like to take some time to share them with you. And to tell you how much D you need to be taking to get—and stay—healthy.

Tack decades onto your brain’s lifespan—and your own

A team of New York researchers compared cognitive function among 253 very elderly subjects—ranging from 95 to 109 years old—to 2,451 National Health and Nutrition Examination Survey (NHANES III) participants over the age of 70.

Tests showed low levels of vitamin D correlated to mental decline in both groups. But the exceptionally long-lived group had insufficiency rates comparable to NHANES subjects, despite being as much as 25 years older.1

These results suggest that longer-lived people have higher levels of the sunshine vitamin on average—and better cognitive function well past the age of 90 because of it.

And that’s not all vitamin D does for your neurological health. Yet another study showed that higher levels of D can help stem the progression of multiple sclerosis.2

And as two more new studies show, it can also dramatically boost your odds against another lethal condition…

Double your odds against deadly cancers

A recent meta-analysis looked at data from more than 4,000 breast cancer patients. Researchers categorized women with D levels around 30 ng/ml as subjects with “high” levels. (Not nearly high enough, in my opinion. But I’ll get to that in a moment.)

Women categorized as “low” on vitamin D had levels of 17 ng/ml. (This number represents the vitamin D level of the average American breast cancer patient, by the way. And it’s woefully deficient.)

Results showed that breast cancer patients with the highest vitamin D levels had better odds of survival than women with the lowest levels. And I mean much better. In fact, the women with “high” vitamin D levels were half as likely to die from the disease.3 (Now just imagine the protection they would get if their levels were truly optimal. Again, more on that in just a minute.)

But women aren’t the only ones who can benefit from higher levels of D. Another recent study looked at veterans with prostate cancer. And they found that over five years, men with vitamin D deficiency were six percent more likely to die of the disease.4

Ward off heart disease, chronic pain, and pregnancy complications all at once

So when I tell you that getting enough vitamin D can save your life, I mean it—literally.

But just for good measure, here are some more recent findings to add to the pile:

So let me say it again. Vitamin D is really is that important.

Why you still need more D than you probably think

If you haven’t had your 25-hydroxyvitamin D levels tested recently—or ever—make an appointment with your doctor to get it done ASAP. Especially if you’re suffering with a chronic or life-threatening disease like diabetes or cancer. Once you’ve established your current vitamin D level, you should be re-tested every six weeks, until your levels are where they should be.

And speaking of vitamin D levels… A level of 30—like the one considered “high” by the researchers in the breast cancer study above—might be sufficient. But it’s certainly not optimal. You want to aim for closer to 80 ng/ml instead. Unfortunately, most people don’t have levels that high right out of the gate.

That’s why I make vitamin D status a top priority at my office. I regularly test every single one of my patients to assess their blood levels. And I almost always prescribe a daily supplement.

To reach an optimal vitamin D level, most people need more than the maximum 2,000 IU per day most doctors will recommend to their deficient patients. (That is, if they even test for D in the first place—much less recommend vitamins.)

To effectively restore healthy D levels, I generally prescribe 10,000 IU of vitamin D3 on a daily basis to my patients. And a lot of times, they’re shocked (and a little nervous) to take a dosage this high. But as long as your blood levels are screened regularly, there’s no reason to take any less.

I take 10,000 IU every day myself. And I feel better than ever. After following this protocol for a few weeks, my patients say the same. Frankly, this dose might be “high”—but it’s the amount many people need to keep their blood levels between 80 and 100.

Of course, you may be wondering if the arrival of summer—and more sunshine—means you can reduce or even eliminate your vitamin D supplement. Well, it depends.

As I’ve mentioned many times before, sunshine is an effective way to boost your vitamin D levels. (The best way, actually.) But this strategy comes with some critical caveats.

You can supplement with lower doses of D during the summer IF you get full mid-day sun exposure over most of your body. Without sunscreen. For 20 minutes per day. Every day.

But in order to eliminate it altogether, you’d also have to live in South Florida or the very Southern part of Texas. If you don’t, you absolutely must take your vitamin D. Every day of the year.

My minimum recommendations are 2,000 to 5,000 IU of D3, regardless of the season. And if you don’t get outside much thanks to long days at the office, you may still require 10,000 IU—even in the dog days of summer.

You won’t know for sure until you get tested. So, once again, if you haven’t had your levels measured lately, ask your doctor to check them today.